boiler ship or in the Indonesian language is called a Steam Boiler is a tool to produce water vapor, which will be used for heating or driving power . Fuel boiler assortment of popular coal and fuel oil , to electricity , gas, biomass, nuclear and others.
Boiler Applications on Boats
The main function of boilers on ships is to produce steam. Steam produced by the boiler aside from being the ship’s fuel heater as mentioned, can also be used to drive a steam turbine which is also used as the main driving motor of the ship .
Boiler boilers (Boilers) heat the liquid in it and convert the liquid into steam. Steam that has been formed is then flowed to the parts that need it, it can be used to drive a steam turbine or be used as a heat source.
the function of boilers on ships is to generate power for prime movers and auxiliary movers , for heating equipment (space heaters, fuel , oil loads etc), on tankers are used as oil tank cleaners (Tank Cleaning).
boiler ship pictures (vertical and horizontal boiler) 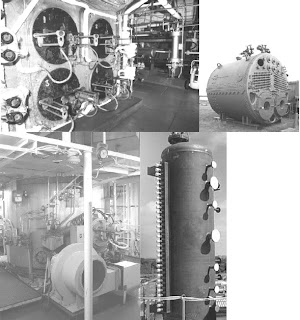 drawing of a ship’s boiler
Boiler ship is part of the equipment used to help the work of the main driving machine . In carrying out its work, ship boilers need some other equipment. As the definition, a ship’s boiler is the equipment used to convert liquids, that is water, into steam, the ship’s boiler needs material to be converted into steam, which is water (commonly called: feed water). To convert a liquid into a steam boiler requires heat, the required heat is obtained from the fuel. The liquid flow to become steam is depicted in the following figure:
drawing of a working boiler boiler scheme
drawing of a working boiler boiler scheme
If the pump is used to move fuel from the tank of fuel to the main propulsion engine, how the ship’s boiler? Ship boilers also play an important role in the operation of the enginemain. Fuel that is moved by the pump in general is a fuel that has a high viscosity, this viscosity affects the viscosity of the fuel. so that if the viscosity value is not lowered then the fuel will thicken and is difficult to pump and difficult to enter the main engine driving fuel nozzle. To reduce this thickness, the fuel must be heated first. The process of heating the fuel must not use fire, because the fuel will easily burn. The process of heating the fuel uses a stream of hot steam that is flowed through pipes installed in the fuel tank or in the path of the fuel flow to the main engine. The hot steam that is supplied is obtained from the ship’s boiler
March 11, 2020/Boiler Applications on Boats/Tags: Boiler Applications on Boats, boilers on ships, crude oil ship boilers, drawing of a ship's boiler, erection ship boilers, Maker ship boilers, MFO ship boilers, Pao ship boilers, prosusen ship boilers, sales ship boilers, ship boilers, ship boilers engineer, ship boilers tanker, ship's boiler
Like this post!