The pressure vessel itself is a place used to store fluid, whether in pressurized or non-pressurized conditions. If I translate from the language of the book, essay eugene f. Megyesy, pressure vessel is defined as a container of metal (steel) which is usually cylindrical or sperical, which can withstand certain loads. 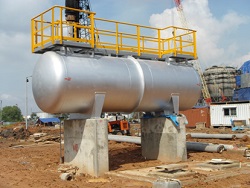 If we see (for example passing through an oil treatment plant) and there is an object like the picture above, that is the vessel. For mechanics, especially technical people, vessels are not strange things. Especially for those of you who work in the oil and gas field, including some processing fields, you will usually use a vessel. Do not have to go far, LPG gas cylinders that are in the house, it is also a pressure vessel whose type of fluid is gas.

The next question is, what is the purpose of the vessel?

Many actually, but the most common thing and is taken from food, the vessel itself is a place. So it is just a place. Then if it’s just a place, why use it on the cover? Why not make it like a pan, sometimes we can open it?

It’s simple, even we need to cover the pan sometimes, so what? The contents inside are not dirty. It’s that simple. In the vessel itself there are also those that have a surface that is not closed, we usually call it a tank. In the tank itself, some are closed and some are not, in the sense of being tightly closed, cannot get air in and out. Another function of pressur is to separate, or better known as a separator. That is where the fluid in the form of oil, will later be separated through this vessel and divided according to the type of fluid. Maybe next time we will discuss in detail, but at least, this is the opening of what is a pressure vessel . 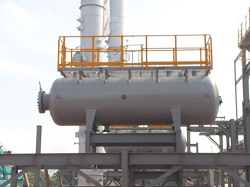 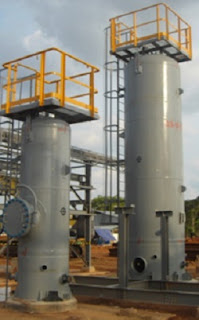 There is one more type of support for vertical pressure vessels, lug. Where the vessel will be propped up not from below, but in the middle of the part of the vessel itself. However, this type of support is rarely used, only a few special conditions when used.

The next question is, what is the difference between vertical or horizontal pressure vessels?

As far as I know, the difference is in terms of the process. The person who determines whether the vessel uses a vertical or horizontal type. But from one side, according to the oil and gas production handbook by Harvard Devold, vertical vessels are used for separators which use gravity as the separating media. As we know, if the density of the fluid is renewed by gravity, the fluid at the top has a lower mass than the one below. So with this vertical vessel, the fluid will be easier to separate. 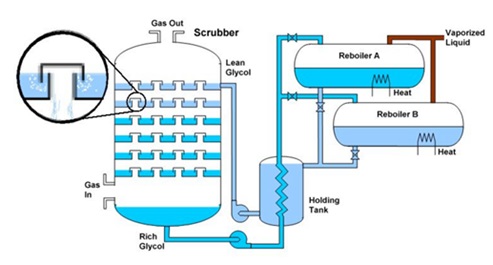 Therefore, vertical pressure vessels are usually of the coloumn type. For some types or parts of vessels, such as saddle, maybe you are there who are less familiar. Another opportunity I will discuss about the pressure vessel . Actually there is another division of vessels, but now I used to share it simply. Next time, I will complete the distribution of pressure vessels again.