Pressure vessel according to one literature, vessel is considered as the heart of a chemical and processing industry. What caused it? because there is a process that occurs in the pressure vessel. In reactors, there are chemical changes. In column or tower fractionation, the separation process occurs. Therefore, the placement of vessels from both the orientation and location of the nozzle becomes an important consideration.

Equally important is that for those of you who are in mechanics, you have to understand what a vessel is, what parts of the vessel include what terms are used in the vessel . Although not all the terminology I will write here, but at least you can understand a little of the term vessel the most commonly used. 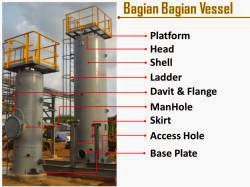 Anchor bolts are bolts that are attached to the concentrate foundation in order to strengthen the vessel’s position so that it does not move. More complete about bolt, please read the article Difference between Machine Bolt and Stud Bolt

Access opening is a circle (like a hole) in the skirt vessel, which allows the operator to enter and perform maintenance. Some other terms mentioning it with the Access Hole Base plate is a flat plate part of the vessel which is located below the plaing, it is in direct contact with the foundation. Baffles are flow retaining plates contained in the equipment vessel. Usually there are baffles after the nozzel with the aim that the nozzel flow does not spurt immediately, but is restrained and falling down.

Davit is a tool whose main function is to transport on vessels, usually placed with socket connections which can later be used to carry blind flange. As for columns, usually called davit columns, it serves to lift relief valves, trays and other internal vessels.

Hinges are mechanisms for lifting or moving blind flange which is the cover of the mainhole. The hinge functions the same as davit, it’s just a different shape. Navit or hinges are used, because the blindflange is heavy enough and the operator will not be able to lift it. The difference is, if you use the opening and closing mechanism, if you move the mechanism of the blind flange. 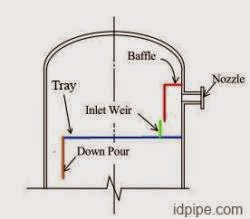 Downcomers are square plates that are bolted to shells and trays, usually inside cloumns. He was tasked to escort the fluid and to prevent the flow of steam through it. other terms call it downpour.

Flange is one type of connection that connects vessels with pipes or other equipment. This flange is part of the nozzle. fuller neighbor flange, read in the article types of types of flange

Head is the tip of a vessel or tank cover

Hemispherical head is a type of half-ball-shaped head, more fully in the article type head on the vessel

Ladder and cages arestairs and cages (cages), cages function to prevent the operator from falling from the stairs, besides that it has a psychological effect in the form of security for the operator when climbing stairs.

Legs are pipes (or other plate material) that serve to support the vertical vessel, replacing the skirt. if the skirt is like a skirt, then this leg is like a foot.

Manhole is a nozzle, the difference is it is not connected with the pipe only closed with a blind flange. The later manhole will function as an access space for operators who will enter the vessel for maintenance or internal vessel installation.

Nozzle isthe output or input chamber in the vessel, made with or without a pipe cut with a flange. please refer to the difference between the nozzle flanges

Platforms is a place holder or footing that is outside the vessel, to supplement please read the parts of the pressure vessel

Reinforcing pad is a plate shaped like the curve of the shell or head to be welded with nozzel, serves to reinforce the nozzle.

Saddle is like a human foot, it is a buffer of horizontal vessels made of plate arrangement.

The shell is the circular side of a vessel or tank.

Sleve opening isa hole made in the skirt, which allows the pipe to pass through the skirt to come out. Similar to access opening, the difference is for pipes not people.

A skirt is a support, the same as a saddle, the only difference is that the skirt supports a vertical vessel that looks like a skirt because it envelops the vessel.

Tray is a separator, is the inside of the vessel, its function is to hold the fluid entering the equipment, so that the fluid entering from the nozzel does not directly fall down. This tray makes it possible to pass through the gas so that it rises to the top, while the liquid fluid will remain retained. And usually the tray is made stratified, more fully read in the articlethe workings of a tower or column Vortex braker is a device that is inside the vessel in the vessel’s output space, usually in the bottom (nozzel flowing) whose function is to break up the vortex to prevent cavitation. 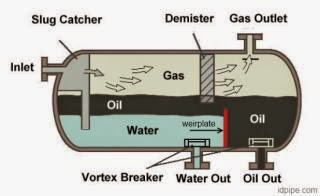 Weir plates are separators in horizontal vessels. Weir plate has the task of separating oil and water so it does not interfere as in the type of separator vessel. to understand like the working principle of vessel separator, you can see in my article the division of vessels based on the process . Weirplate also needs to be considered for maintenance, therefore one every one part of a horizontal vessel separated by a weirplate, then given a main hole. So in one vessel, there can be 2 manholes.