valve or also called a valve is a device to regulate the flow of a fluid by closing, opening or inhibiting part of the flow of the flow. An easy example is a water tap . It is an obligation for a pipe engineer to know at least the basics of this valve. Above the valve vessel plays an important role in pipe installations , both vessel fuel pipe installation , ballast , bilge , sanitary , and others.
the types of valves that are often used are gate valve , globe valve , butterfly valve , ball valve, plug valve , and check valve or non-return valve .
1. Gate valve (valve)
This type of valve has a form of disk divider, or often called a wedge, which is moved up and down to open and close. Usually used for a perfect open or close position and is not recommended for partially open positions.

picture of the gate valve when open 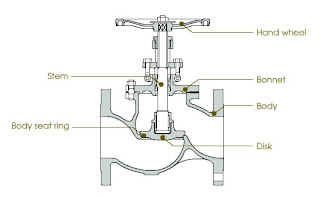 Picture of valve globe components (please click the picture to see the large size)
3. Butterfly Valve
The shape of the insulation is a disk that has a rotating axis in the middle. This type of valveAccording to the design, can be divided into concentric and eccentric. Eccentric has a more difficult design but has a better function than concentric. The simple shape makes it lighter than other valves .
picture of the Butterfly Valve component 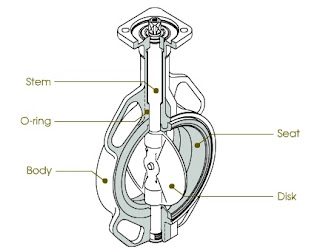 picture of the Butterfly Valve component
6. Check Valve or Non-Return Valve This
type of valve has a function to drain the fluid only in one direction and prevent the flow in the opposite direction. It has several other types based on its interior like double-plate, swing, tilting, and axial.
picture of the check valve component 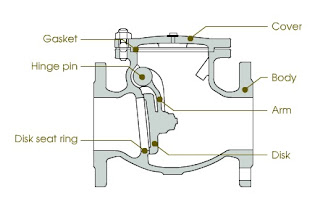 picture of the check valve component
4. Ball Valve
The shape of the sphere is a spherical shape that has a hole breaking through the center.
picture of ball Valve components 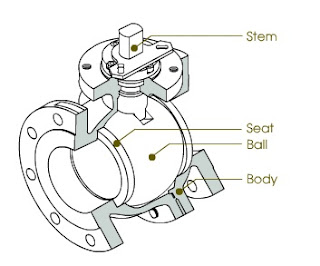 5. Plug Valve
Like a ball valve, but the inside is not spherical, but a cylinder. Because there is no empty space inside the valve body, it is suitable for fluids that are heavy or contain solid elements such as mud.

Then how do you choose the type of valve (valve) between the gate valve and ball valve which both have the same function? The structure of the ball valve allows the use of soft / resilient seats for the insulating part. With the soft seat, a ball valve can be made with a guarantee of zero leakage that cannot be applied to the gate valve. In addition, the ball valve also has a quarter turn system that allows closing and opening valves quickly. But with the weakness of soft seats that are susceptible to high temperatures, the gate valve has the advantage of being lighter and more economical even though it does not guarantee zero leakage.
This is where the ability of a pipe engineer is needed who can consider various things in making a decision on which valve to use. In the face of such a thing, usually an engineer will consider lessons from the previous design, both from his own experience or from existing data. The following table is a sample handle for selecting the appropriate valve.

well this is the valve character based on the valve type 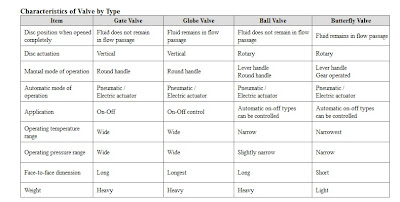 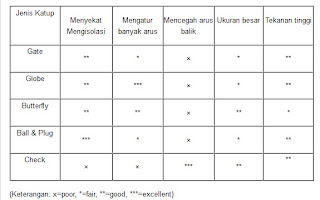 well, that’s my post about the type of valve , how to determine the valve to be used , the valve characteristics table above has similarities and differences , then you can determine the types of valves (valves)
July 3, 2019 / TYPE OF VALVE (VALVE) MARINE / Tags: Jenis Jenis Valve Kapal Tanker, jual globe Valve Kapal tanker, jual valve kapal tangker, pemipaan kapal tanker, TYPE OF VALVE (VALVE) MARINE
Like this post!